I’ve had my eye on this beautiful book, Worn Stories, since I first saw it in my friend’s shop last year. Well, I had my eye on it at the time, I guess, so I added it to my goodreads list, then kind of forgot about it. But yesterday I realized to my horror that CHRISTMAS was upon us, and I knew I’d need some books to comfort and protect me. If I have a good book I can get through anything. I consulted my list, looked up some of the books in the Philly Free Library catalog, and walked to the corner to catch the bus there.

I started Worn Stories today and it has not disappointed me. In fact, it’s surprised me by being much better than I expected. I spend a lot of time musing about clothing in an intellectual sort of way, and I have no objection to fruity, thinky, noodly pieces of writing on the subject. That’s more or less what I thought these pieces—contributed mainly by well-known artists and designers—would be like. But these stories have drama! People are talking about grandmothers emigrating from Sicily, and construction workers fighting off robbers, and Hurricane Sandy. They’re writing about silk ties and leather coats, yeah, but also about new babies and race horses and criminal court appearances. There’s a lot of life in this book. I’m finding it cheering and more than a little inspiring.

Now, when I was just about to move out of the first apartment I shared with my husband into the house we live in together now, I came across a pair of hair combs I’ve had for many years. I considered giving them away, but I didn’t do that; instead I just considered them. I wrote about them at the time, and I’d like to share that piece of writing with you now, in the spirit of Emily Spivack’s engaging, thought-provoking book. 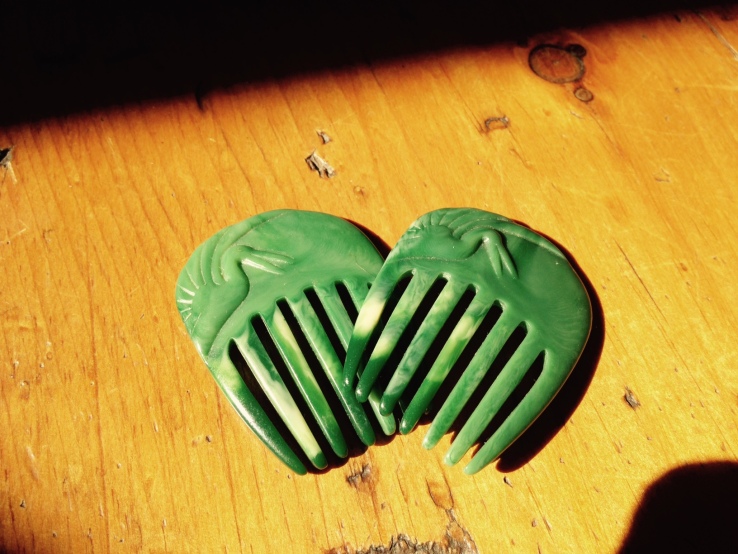 Well, it’s that time again. Time to clear out the clutter, sort through old memories, and decide what should stay and what should go. We’re about to move to a new neighborhood, and all this old stuff can’t come with me. With us. For such a long time it was just me living someplace, just me packing up my stuff to move to some new apartment or new life, but now it’s us. Things have changed and I guess they’ll continue to.

I’ve had a small pair of emerald green hair combs in my bathroom since I was 20 years old—for 18 years now. They’re art deco ones, made of celluloid or lucite in the 1920s in the “Oriental” style that was popular then, with cranes etched into the front. I bought them while I was still in college and exploring the city on my own, which was something I have continued to do in all the years since. Wandering silently, observing the life on the streets around me, then ducking occasionally into some cramped, dim little shop to dig through the old things there and drink in the mysterious energy that always fills those places. Sometimes I’d say hello to the person behind the counter, other times they’d never even see me there as I looked around and they worked, head down as they read or wrote something, their face hidden behind a stack of dusty books or some other fabulous junk.

I hardly ever bought anything for myself back then because I didn’t have much money, and I hadn’t yet grown into the, um, much more developed relationship I now have with the objects I own. I didn’t collect much, didn’t yet hoard things, hadn’t learned the way you can love and relate to an object almost as though it’s a person, with its own life force and set of memories. But one day, in one of those little shops in downtown Philadelphia, I saw these combs and they seemed to glow with the life they’d once seen. Right there in Philly, maybe, tucked into the hair of some beautiful girl who was still young and single and out having fun. The man at the shop was gentle and sweet and he liked that I appreciated what was special about the combs. He told me about their age and what they were made of. I bought them knowing I probably wouldn’t be able to wear them in my fine, slippery hair, and I haven’t. That never bothered me, either. The point of owning the combs wasn’t to wear them, but to begin building a grown-up life for myself, to become that beautiful young girl who was out living it up while her pretty things, her treasures, stayed at home, scattered around the bedroom and on the vanity as though they were half-forgotten, but not actually neglected at all. They were essential, and they played their role seriously and with great dignity, lying around pretending to be unimportant and waiting for me to come back home each night. You can’t be the character without the props. I needed the combs—and the funny wide-legged pants, and the old-fashioned handbags, and all the other stuff I’d eventually acquire that would help to transform me, on the outside, into the person I already knew I was.

The combs have stayed with me all this time, moving back home with me to my mother’s house after my father died, then into an apartment that was just mine—well, mine and Trixie’s, Trixie being the illustrious, glossy black cat who was my closest friend for years—and then here with Joe, where we moved to start a life together. When we were first settling into this place and I was decorating our bathroom, I placed them in the bone china teacup where I keep my earrings, and where I could see them every morning while I did my makeup and hair. It’s never occurred to me before now that I could not have the combs. Like, they don’t even really belong to me, but to the movie set of my life. Could I get rid of them? They’re a symbol of the kind of woman I wanted to become—independent (solitary, even), funny, smart, unflappable—which is an identity I’ve clung to because I’m so afraid to lose it. If I’ve invested all these pretty things with the hopes and dreams I’ve had for myself, would I be giving up on the dreams themselves? Do I need the things and the strength they give me, or could I manage without them?

Right now our hallway is filled with things we’re ready to part with—scarves and gloves and duffel bags, cookbooks and ceramic planters and a wonky little Hibachi grill that tips over every time you pour charcoal into it. Some of them are things Joe and I got together, and some are things we each brought to this new arrangement but don’t need anymore. I took the combs out of their teacup earlier, with the idea to give them away or try to sell them, but now I don’t know what to do. They deserved this little tribute and having written it, I might not need to hold onto them anymore. But here they sit, looking back up at me, almost a part of me now. I can’t decide. I’m a different person now than I was at 20, but that girl still lives inside of me, looks through my eyes, can’t quite believe what she sees in the mirror nowadays. I don’t know if I’m ready to stop being her for good, or to let go of my longing for a future that’s still unfolding.

My name is Katie and I'm a writer. Yeah. www.thelalatheory.com View all posts by thelalatheory