Today the poet Lawrence Ferlinghetti turns 100 years old, and he’s just put out a new book. Pretty incredible, right? Even more impressive is how intense the book is, and the power and vitality of his intellect even now. Little Boy is a novel—the author has been very clear about that—but it’s also in no small way about the life, or the kind of life, that Ferlinghetti has lived. 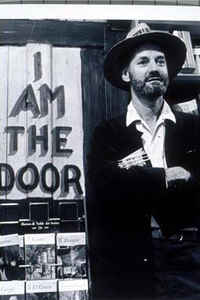 I reviewed the book for the Utne Reader‘s spring issue. Here’s what  I had to say about it:

Ladies and gentlemen: Lawrence Ferlinghetti. The co-founder of City Lights, the bookstore and small press that opened shop in the 50s in order to publish the only poets that mattered—or the ones who mattered most in their corner of the world, anyway—Ferlinghetti, who has published some 40 books of his own work, will be best remembered for A Coney Island of the Mind, a collection of vivid and lyrical poems that remains popular 60 years after its first publication.

If it makes you feel blue to anticipate the way someone will be remembered while he’s still living, apologies. It’s just that Ferlinghetti turns 100 in March, and he has just put out a new book. He’s calling it a novel but it is clearly also a sort of memoir—a praise-song, a thrashing-about, a recounting of his colorful life—and at his age, it’s hard not to read it as a kind of elegy for someone who is decidedly not! Dead! Yet!

The book begins like a third-person biography of “Little Boy,” whose early life was characterized by instability and displacement. With the detachment of a biographer, Ferlinghetti describes a childhood spent bouncing around—from the mother who couldn’t afford to care for him after his father died, to his beloved aunt who brought him to France for a few years and then back to New York City, and eventually to the home of a rich couple in Bronxville—the Bislands, whose family founded Sarah Lawrence College. In the middle of this factual accounting, Ferlinghetti shocks the heart back to life with the phrase, “lonely was the word.”

From here the narrative goes swooping into one long sentence that accounts for his college years, his service in the navy, and the time he spent faffing around Paris in a cold-water flat after the war. By this point the language has broken loose from its moorings, and for the rest of the novel it rushes forth, much more like poetry than prose. The reader has the sense that Ferlinghetti had to make an effort to contain it.

At first glance the text on the page looks more unruly than it is: Ferlinghetti uses virtually no punctuation, no chapters, hardly even a paragraph break. But the start of each new thought is usually capitalized, and the rhythm of the language creates a cadence in the mind that serves as a kind of guide.

Still, it’s intense. The language has a way of sucking you into its whirl and then popping you back up to the surface, over and over again, whether you meant to or not. This isn’t a novel you’re likely to read straight through. Memories, lines from novels, internal rhymes, love and sex and anti-establishment rants, marvelous little throwaways (“Mao say tongue-in-cheek”), caustic observations from the coffee shop—it’s all one steady-churning white water rush.

Run your eyes down any page to hear a bling-blinging Pinball machine of references: Twin Towers, South of the Border, Onward Christian Soldiers, Mister Proust. Ginzy and Jack are in here too (you’ll permit Ferlinghetti a few trips down memory lane) but this is bigger than Beat Generation windbaggery—and actually, maybe it’s not really a memoir, either. The narrator’s voice is alive with humor and anger and a sense of the eternal now, not the what-happened-then. And each time he starts ranting about the people in the cafe where he’s sitting, all entranced by their “portable universes and handheld computers,” you will absolutely marvel: He’s still pissed!

In a sense, Little Boy reads like a continuation of the last poem in Coney Island. The whole novel, like that poem, has the word yes threaded throughout it—“the small boy knows nothing, he is just a part of it, unconscious in his little existence on the turning earth in some town or city or yes…”—and the earthy positivity is strongly reminiscent of the Molly Bloom soliloquy that ends Ulysses (“And yes I said yes I will yes”), which Ferlinghetti actually referenced by name in his 1955 masterpiece.

And it must be said: This yes is the voice of the 20th century, a century Mr. Ferlinghetti saw much of, with its exuberance and nihilism, its god-is-a-shout-in-the-street realist grit. Whether the poet ends this particular book on a hopeful note or one of despair, that’s for you to judge. Either way, Ferlinghetti’s old age is a rollicking one, and it burns and raves at close of day.