I have a few things planned for this weekend—start seedlings, see a chiptune show, loaf—but this morning my sister reminded me that the new Pee-wee movie is coming out on Friday, so my priorities have shifted a bit. I’ll still do that other stuff probably, but first I have to watch Pee-wee’s Big Adventure and take notes for a costume. If there’s one thing in this world that I love doing, it’s constructing a character costume using stuff from my own closet plus a few choice items from the thrift store. I’ve got bags in my closet marked LITTLE EDIE, PRETTY IN PINK, BREAKFAST CLUB, and EDWARDIAN LADY, which I know sounds pretty creepy, but I am awfully proud of these concoctions.

My sister is thinking of having a small viewing party for the new movie, so don’t tell her but I think I’ll show up to her house in costume. Who will I be? The fortune teller? (“Alright, you wanna wear a wet jacket, it’s alright with Madam Ruby.”) The greaser bicycle thief? Large Marge? Pee-wee himself? My weekend is looking busier by the minute. And before I get down to work, I’ll share this essay I wrote for the Utne Reader a couple years ago. As you can see I’ve been thinking about the character of Pee-wee Herman for a while, and I haven’t gotten tired of it yet. It’s like I’m unraveling a big cable-knit sweater that someone keeps knitting … and knitting … a-a-and knitting … 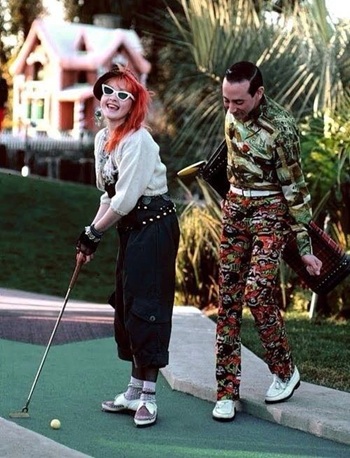 This old picture of Paul Reubens with Cyndi Lauper rolled past my tumblr dashboard today, prompting me to reflect on him. Reubens lives, in my mind, in the small category of famous people who I really wish I knew. I am not into hero worship, honestly. I just think he and I could be friends.

I once listened to an interview he did with Terry Gross on Fresh Air. (You can listen to or read it here.) They talked about his early life, and at one point he recalled moving to Florida from upstate New York when he was around nine years old. When his parents told him they were going to Florida he was all excited, thinking they were moving to the tropics. It was important to him to look the part. His mother took him shopping for school clothes and he picked out things that would suit his new look. (Apparently he had more agency in this arena than I did.) He’d be, like, a beachcomber. That’s what you do in Florida, right? Comb beaches? He showed up for the first day of fourth grade wearing clam-diggers and a nautical-themed shirt, “like a total freak.”

I love this story. Picture it: You’re little Paul Reubens, the future Pee-wee Herman, and you wear costumes instead of clothing because to you, costumes make sense as a part of everyday life.

He goes on, in his conversation with Terry Gross, to explain how—even though he figures most kids would have bowed to the peer pressure to look a little bit less like a total freak—he really felt his classmates were missing something obvious. “I was sort of like, ‘Don’t you get it? You know, I’m a beachcomber.’” And he kept on wearing his get-ups to school.

Well I get it. Don’t you? Thematic outfits. Dressing for the occasion. Or as I have always thought of it, dressing appropriately to such an absurd degree that it becomes (deliciously) inappropriate.

I once got roped into attending some event at “the art museum,” as we folks from Philly call the recently rebranded PMA. It was a cocktail party, and I guess I should admit that I wasn’t roped into attending it at all, but actually talked my mom into accepting the invitation so that I could join her. It took place in the evening, after the museum’s normal hours, which is a really thrilling time of day to find yourself in a museum, first of all, and it was to be held in the gallery where a visiting Degas show would be exhibited. Ballerinas and horses, you can picture it. I wanted to go because of the ballerinas. I had a tiny sparkly black dress that I fancied looked like a ballet costume because it was sleeveless and stretchy and tight in the bodice like a leotard, and had a short skirt that twirled out a little when I moved, like a tutu. I wanted someplace to wear it, and this would be perfect. I even bought real ballet slippers from a dance wear store in town. (“Did you see this in a magazine or somethin hon?” they asked me when I went.) They were soft, peachy-pink shoes, which you cannot wear on the street (as I found out the hard way): They are not made for walking anywhere but on a polished dance floor, so the soles will tear and fall apart if you try it. The shoes were what made the outfit a dancer’s costume, but the thick black leg warmers I bought at a thrift store turned the costume into a joke, which was crucial. I was a dancer at rehearsal, ya know, just like Degas’ ballerinas were—except that the young girls he depicted were not wearing legwarmers. That was some Fame shit, a reference to my actual storehouse of cultural knowledge: not 19th-century French painters, but melodramatic TV shows from the ’80s where everyone looked hot. I knew I looked pretty in the dress, but looking pretty on purpose is so embarrassing. You have to foil it somehow. (See this.)

I was 23 or 24 that year. I stood around with my mom all evening, looking at the fingerprinty sculptures and waiting for someone to get my joke. Toward the end of the evening, over near the dessert table, a mean-looking older lady asked me—perhaps meaning to be kind, actually, now that I think back on it; she couldn’t help what her face looked like—“Are you a real ballerina?” I remember feeling embarrassed but I didn’t show it, I just twirled away. I looked better than all those losers anyway.

When my sister and I were kids, we watched a recording of Pee-wee’s Big Adventure that we’d taped off TV (missing the first five minutes or so, when Pee-wee is still in bed asleep and dreaming of winning the Tour de France) approximately 200 times. The word approximately makes it sound like I’m being facetious but I’m honestly trying to remember. We certainly watched it most days of summer vacation—which is what, 90 days?—for at least two summers running. We used to be able to do the entire thing by heart, back and forth, each of us taking whatever line of dialogue came next.

I’m not entirely sure I understand why the movie was so important to us. I mean it’s funny as hell, and kids do have a tendency to watch the things they like over and over again, but there must have been something about it that satisfied us on a deeper level. Maybe it was because, as a kid-adult, Pee-wee knew how much fun being an adult would be / was. Maybe it was the coded clothing that appealed to us, its costumey obviousness a kind of reassurance that you can grow up and become a thing, which is what all little kids want to do.

There are so many looks in that movie, so many things to be. There’s the hood who steals Pee-wee’s bike— spoiler alert! He’s dressed like a greaser from the ’50s, oily hair, cuffed t-shirt and all. The fortune teller Pee-wee visits looks like a “real” fortune teller, a “gypsy” with coins dangling from the scarf on her head. The hobos wear  hobo hats and have hobo beards. You gotta look like the thing you are, otherwise no one will know.

When Pee-wee goes to Hollywood in search of his bike, he strolls around the lots at Warner Bros. Studios and looks in wonderment at the actors in actual costumes. There’s even a bit of gender bending thrown in for good measure: When Pee-wee talks to a showgirl and an intergalactic-lookin’ dude, a man’s voice comes out of her mouth and a woman’s comes from his.

The Pee-wee outfit, of course, is the point of the whole thing, the look the entire movie is hung from. The outfit itself is the character, and that character is a boy who lives on his own and decorates his house however he wants and is a “grown man” in a suit and bow tie. That’s what grownups wear, right? A bow tie?

This week I’ve been reading the new book by New Yorker critic Hilton Als, his first in 17 years, an extraordinary thing with the arresting and uncomfortable title—spelled out in uncomfortably large white block letters against a black background—of White Girls. (Especially awkward if you are one, and a lot of your neighbors are Black, and you try reading it surreptitiously on the bus.) The book is a collection of essays, some of them a blend of autobiography and cultural criticism, others profiles of complicated public figures like Eminem and Richard Pryor that allow Als to apply his deconstruction of the many-layered cultural meanings of race. For my money, the most compelling piece in the book is the one about André Leon Talley, who is, among other things, a Black celebrity. Talley is the former creative director for Vogue, and has become a recognizably famous (for a magazine editor), so we know what he looks like. In fact what he looks like—six foot seven, larger than life, and never not draped in capes or furs or velvet—is pretty important to who he is. I won’t give away Als’ ending to the piece, but I can tell you, you’ll come away with your heart slightly crushed by the idea of this man who so needs to believe in the “kindness” (Talley’s word) of fashion that he overlooks its cruelty.

There are other fashion-world figures who dress in costume all the time, like John Galliano (the one who always looks like either a sailor or a pirate) and Karl Lagerfeld, who always wears a stiff high collar and huge dark glasses and looks like the pope, or else like an evil overlord who should be stroking an evil cat that sits in his lap. (FYI, two of the categories that come up for Lagerfeld in a Google image search are “glasses” and “cat.”) Galliano looks mean and Lagerfeld looks twisted, but Talley dresses and talks with an extravagance I find utterly touching and sympathetic. Not because I wear couture, or whatever, but because his sense of glamour is, if not ironic, totally self-conscious and performative. It’s this idea of always mugging for an invisible audience—and incredibly, the audience will eventually materialize, because when you dress and act in an outrageous way, people are gonna look.

Pee-wee Herman is a side of Paul Reubens that we know is real. We can imagine him dressing in Pee-wee’s clothes every day—though we know he doesn’t—so when he shows up to mini-golf in a preposterous-yet-fabulous, mismatched-but-perfectly-paired top and pants (and golf shoes! He’s golfing!) we can perceive the outfit as a concession of sorts, a stand-in costume for the Pee-wee one that he can’t wear in real life. And of course he was friends with Cyndi Lauper (who is of course also wearing golf shoes in the picture). Like Talley, both of those people knew that you can create yourself with clothing—or you can at least create a character that is not you but becomes you to all the people looking on, which for some of us is the self that matters most.